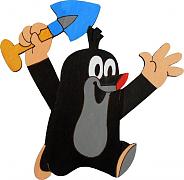 There are different methods of transporting people from place to place: cars, bikes, boats, trains, planes, etc. For very long distances, people generally fly in a plane. But this has the disadvantage that the plane must fly around the curved surface of the earth. A distance travelled would be shorter if the traveller followed a straight line from one point to the other through a tunnel through the earth.

For each test case, output a line containing a single real number, the difference in the distance between the two points following the great circle route around the surface of the earth and following the straight line through the earth, in metres. Your answer should have an absolute or relative error of at most $10^{-7}$.