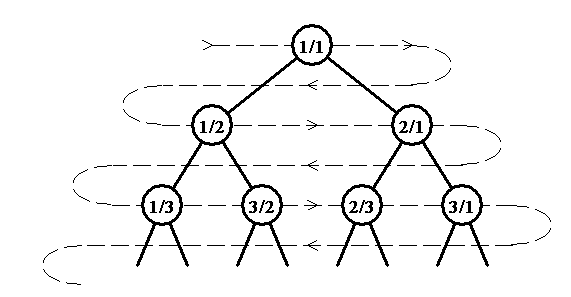 A rational sequence is defined by doing a level order (breadth first) traversal of the tree (indicated by the light dashed line). So that:

Write a program which takes as input a rational number, $p/q$, in lowest terms and finds the next rational number in the sequence. That is, if $F(n) = p/q$, then the result is $F(n+1)$.

The first line of input contains a single integer $P$, ($1 \le P \le 1000$), which is the number of data sets that follow. Each data set should be processed identically and independently.

For each data set there is a single line of output. It contains the data set number, $K$, followed by a single space which is then followed by the numerator of the fraction, followed immediately by a forward slash (/) followed immediately by the denominator of the fraction. Inputs will be chosen such that neither the numerator nor the denominator will overflow a 32-bit integer.