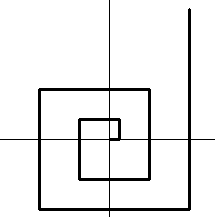 Write a program to determine the shortest growing rectangular spiral (in total length) that ends at a given integer point $(x,y)$ in the first quadrant or determine that there is no such spiral.

The first line of input contains a single integer $P$, ($1 \le P \le 1000$), which is the number of data sets that follow. Each data set should be processed identically and independently.

Each data set consists of a single line of input consisting of three space separated decimal integers. The first integer is the data set number. The next two integers are the $x$ and $y$ coordinates of the desired end point ($1 \le x \le 10000, 1 \le y \le 10000$).