Problem A
The Last Laugh

The self-proclaimed “super duper party pony” and amusement factory owner Cheese Sandwich has lost his laugh, and it’s up to his longtime pal Pinkie Pie to get it back. 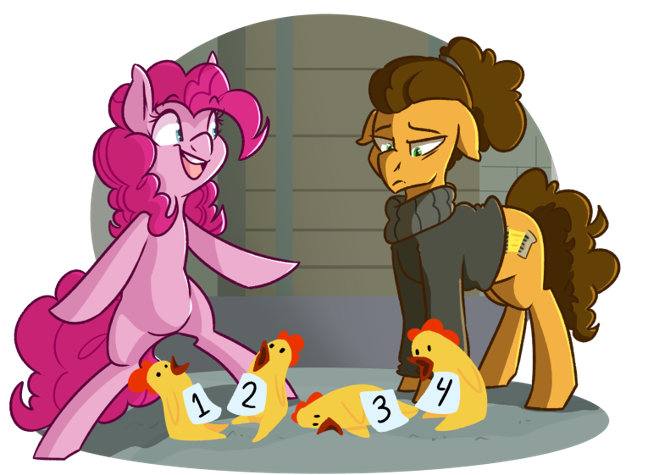 By now, Pinkie Pie has pulled out all the stops to get her “partier” in crime to laugh, all to no avail. As a last resort, she has decided to whip out her secret weapon: the game of chicken, involving Cheese Sandwich’s childhood toy, Boneless the rubber chicken!

To make things funnier, the game will involve four of them. Here’s how the game is played:

Pinkie Pie’s game plan is thus: she will ham up her skills in this game, saying that she has won every game she has played since she was a filly, and then purposely lose to Cheese Sandwich, who has never played this game in his life. This unexpected turn of events is sure to evoke laughter from even the most agelastic of ponies!

Here is the problem. Pinkie Pie is so good that she does not know how to lose. You need to tell her what moves to make such that she definitely loses. Obviously, she still needs to play the game properly—“losing” by not following the rules is not exactly convincing.

Then, your program writes a single line containing a single integer $1$ or $2$ to the standard output, denoting whether Pinkie Pie should go first or second, respectively.

Then, we repeat the following process:

After making a move or declaring that no more moves can be made, do not forget to output end of line and flush the output. To do this, use:

It is guaranteed that at least one valid move can be made at the beginning.

You can assume that the moves Cheese Sandwich makes are always valid, and he will declare the game over if and only if there are no more moves to be made. Likewise, all of Pinkie Pie’s moves must be valid, and Pinkie Pie must lose the game for your solution to be correct.