As punishment for destroying half of his city with his monster truck, Mirko now has to pay off his dept to society. He works as an assistant for a famous archaeologist. One of his duties include crafting keys for ancient document boxes.

In ancient times document boxes were locked using elaborate mechanisms with interesting locks. Each lock is $L$ centimeters long and $W$ centimeters wide and consists of three parts, the upper edge, the lower edge and the empty area between them. Both edges can be represented as a sequence of $L$ nonnegative integers: $r_1,r_2,r_3,\ldots , r_ L$. Each number in sequence represents the width of edge at that point.

The key for each lock is a small clay tab, fitting perfectly in the area between edges. The picture in Figure 1 shows a $7$ cm long, $8$ cm wide lock along with the corresponding key. 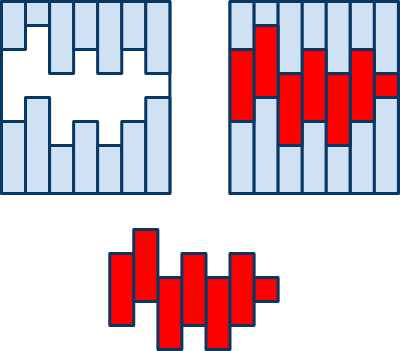 The next $2N$ lines describe all locks. Each line contains exactly $L$ numbers smaller than $W$. Each pair of lines describes one lock. The first line in one pair describes the upper edge, and the second line the lower edge. There shall always be at least $1$ cm of empty space between both edges on all locks.

The first and only line of input should contain a single integer, the minimal number of different keys Mirko needs to craft.