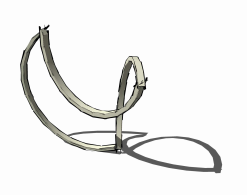 George has $K \le 20$ steel wires shaped in the form of half-circles, with radii $a_{1}, a_{2}, ..., a_{K}$. They can be soldered (connected) at the ends, in any angle. Is it possible for George to make a closed shape out of these wires? He does not have to use all the wires. The wires can be combined at any angle, but may not intersect. Beware of floating point errors.

The input will be terminated by a zero on a line by itself.

For each test case, there should be one word on a line by itself; "YES" if it is possible to make a simple connected figure out of the given arcs, and "NO" if it isn’t.