Grogar was a legendary tyrant who once wreaked havoc across Equestria. Ages ago, his mythical bell and source of power was stolen and hidden at the top of the treacherous Mt. Everhoof, and he was forced to go into hiding.

At long last, he has decided that the time is ripe for revenge. Even in his weakened form, he coerced three hardened criminals to team up and retrieve his bell; with it, all of Equestria will kneel before him once again. 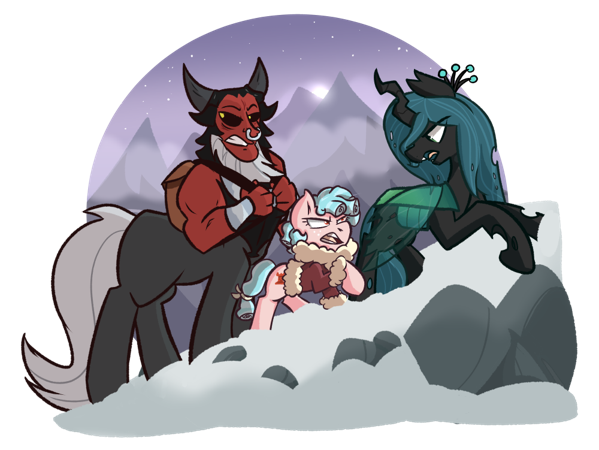 Cozy Glow, Lord Tirek and Queen Chrysalis, three villains with nothing in common other than their lust for power, now face their toughest challenge yet: working together.

Through their individual efforts, they have each managed to reach the highest level of the mountain. Recovering the bell, however, will require them to combine their powers.

The highest level of Mt. Everhoof can be represented as a grid with $R$ rows and $C$ columns. Each of the cells in this grid is either:

In one move, you can direct a character to move in one of the four cardinal directions. The three characters initially begin in different cells, but they are allowed to occupy the same cell at the same time and will not obstruct each other’s movements.

As you can tell, they are new to this whole “cooperation” thing, so they will need a bit of help. Can you give them a list of moves that will allow them to successfully retrieve Grogar’s bell?

If the task is truly impossible, you must also say so.

It is guaranteed that there is exactly one each of c, l, q and % in the grid.

If it is not possible to retrieve the bell, output a single line containing the string IMPOSSIBLE.

Then, on the next $m$ lines, output the moves in your solution. In particular, the $i^\text {th}$ of these lines should contain one of c, l or q followed by one of ^, <, v or >, separated by a space, denoting that the $i^\text {th}$ move should involve Cozy Glow, Lord Tirek or Queen Chrysalis moving up, left, down or right, respectively.

Note that you do not need to minimize $m$.