Tonight is Halloween and Scared John and his friends have decided to do something fun to celebrate the occasion: crossing the graveyard. Although Scared John does not find this fun at all, he finally agreed to join them in their adventure. Once at the entrance, the friends have begun to cross the graveyard one by one, and now it is the time for Scared John. He still remembers the tales his grandmother told him when he was a child. She told him that, on Halloween night, “haunted holes” appear in the graveyard. These are not usual holes, but they transport people who fall inside to some point in the graveyard, possibly far away. But the scariest feature of these holes is that they allow one to travel in time as well as in space; i.e., if you fall inside a “haunted hole”, you appear somewhere in the graveyard a certain time before (or after) you entered the hole, in a parallel universe otherwise identical to ours.

The graveyard is organized as a grid of $W \times H$ cells, with the entrance in the cell at position $(0, 0)$ and the exit at $(W - 1, H - 1)$. Despite the darkness, Scared John can always recognize the exit, and he will leave as soon as he reaches it, determined never to set foot anywhere in the graveyard again. On his way to the exit, he can walk from one cell to an adjacent one, and he can only head to the North, East, South or West. In each cell there can be either one gravestone, one “haunted hole”, or grass:

He is terrified, so he wants to cross the graveyard as quickly as possible. And that is the reason why he has phoned you, a renowned programmer. He wants you to write a program that, given the description of the graveyard, computes the minimum time needed to go from the entrance to the exit. Scared John accepts using “haunted holes” if they permit him to cross the graveyard quicker, but he is frightened to death of the possibility of getting lost and being able to travel back in time indefinitely using the holes, so your program must report these situations. 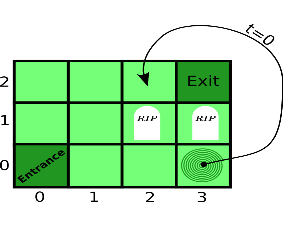 If you do not use the “haunted hole”, you need at least $5$ seconds.

Note that the destination of a “haunted hole” may have the entrance to another “haunted hole”. In this situation, Scared John will enter the second hole as soon as he exits the first one.

Scared John will leave the graveyard as soon as he reaches the exit, even if he would be able to travel back in time by continuing walking through the graveyard.

The input will finish with a line containing 0 0, which should not be processed.

For each test case, if it is possible for Scared John to travel back in time indefinitely without passing by the exit, output Never. Otherwise, print the minimum time in seconds that it takes him to cross the graveyard from the entrance to the exit if it is reachable, and Impossible if not.